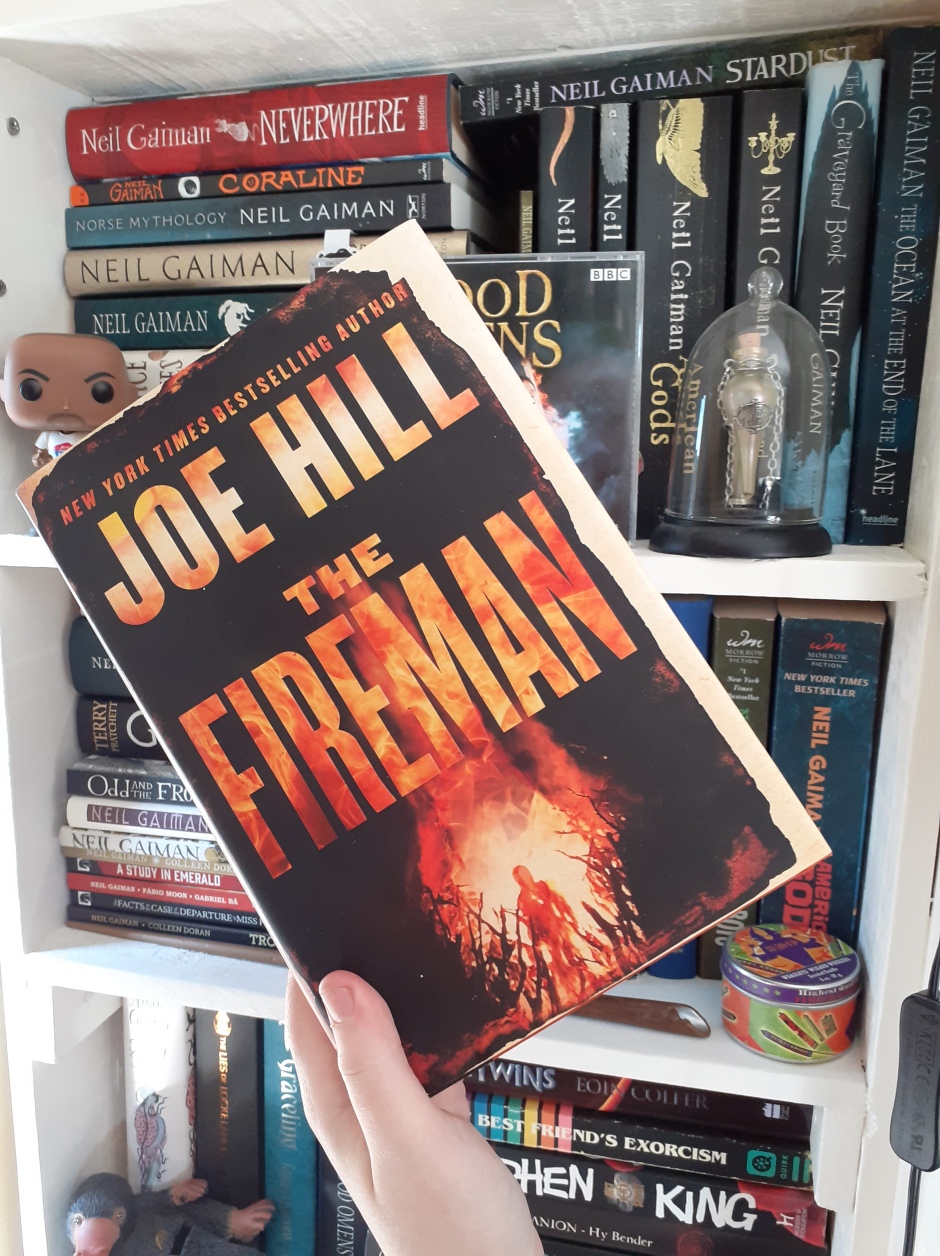 I don’t think a book has taken me this long to finish in a while and it has nothing to do with the length of it either. I started this book on audio the week that I was sent to work from home due to the current pandemic. And this is a book that concerns a pandemic style event. Bad timing?

No one knows exactly when it began or where it originated. A terrifying new plague is spreading like wildfire across the country, striking cities one by one: Boston, Detroit, Seattle. The doctors call it Draco Incendia Trychophyton. To everyone else it’s Dragonscale, a highly contagious, deadly spore that marks its hosts with beautiful black and gold marks across their bodies—before causing them to burst into flames. Millions are infected; blazes erupt everywhere. There is no antidote. No one is safe.

Harper Grayson, a compassionate, dedicated nurse as pragmatic as Mary Poppins, treated hundreds of infected patients before her hospital burned to the ground. Now she’s discovered the telltale gold-flecked marks on her skin. When the outbreak first began, she and her husband, Jakob, had made a pact: they would take matters into their own hands if they became infected. To Jakob’s dismay, Harper wants to live—at least until the fetus she is carrying comes to term. At the hospital, she witnessed infected mothers give birth to healthy babies and believes hers will be fine too. . . if she can live long enough to deliver the child.

Convinced that his do-gooding wife has made him sick, Jakob becomes unhinged, and eventually abandons her as their placid New England community collapses in terror. The chaos gives rise to ruthless Cremation Squads—armed, self-appointed posses roaming the streets and woods to exterminate those who they believe carry the spore. But Harper isn’t as alone as she fears: a mysterious and compelling stranger she briefly met at the hospital, a man in a dirty yellow fire fighter’s jacket, carrying a hooked iron bar, straddles the abyss between insanity and death. Known as The Fireman, he strolls the ruins of New Hampshire, a madman afflicted with Dragonscale who has learned to control the fire within himself, using it as a shield to protect the hunted . . . and as a weapon to avenge the wronged.

In the desperate season to come, as the world burns out of control, Harper must learn the Fireman’s secrets before her life—and that of her unborn child—goes up in smoke.

So poor timing aside, this is definitely up there with Horns for me as one of Joe Hill’s best works (outside of his work in comics). I think he has a true gift with novels that he sometimes lacks with the shorter stories and here it really shines through.

Here we have a world ravaged by a spore that manifests on peoples skin and can cause them to abruptly burst into flames. There is a phenomenal amount of detail put into how the spore infects and progresses. Dragon Scale is a deadly and fascinating disease, with as much detail as Hill was liable to give. Within the world of this book there is many theories that seem plausible for how the Scale works but within a world that is also falling apart and turning into a full scale apocalypse there is very little science to distinctly ground them. I found it reminding me of watching ‘The Walking Dead’ that way (when it was good) and it worked super well for the world building since it somehow made everything that little bit more real.

There is no way that I was getting through this review without talking about Harper. The book is very cleverly structured and timed around Harper’s pregnancy and within the 9 months it is fair to say that she achieves a very emotional character arc. Joe Hill writes wonderful mother figures and Harper is no exception. She is cheerful even in the face of danger but she is far from stupid, with an inner strength that never wains no matter who she is facing down. Although this is a global event, this is very much her story more than the actual story of the total apocalypse and it is handled very well.

There are several other wonderful characters I grew deeply attached to such as the Fireman himself or Nick, a young deaf boy Harper meets at Camp Wyndham. Something I found endlessly interesting was some of the antagonists, like Jakob (Harpers husband) or Carol Storey, another character from Camp Wyndam. Without giving much away, both are very real. Too real, especially Carol.

Hill is truly a master storyteller, no surprise with his parentage but he stands on his own two feet here and not for the first time. I can’t give away any other details about the story without spoiling it but this story is captivating, tragic, optimistic while being realistic and bleak all in one. The book wraps up so well and I can’t praise it enough. I went between the audio and the physical book here again and you are in for a treat with Kate Mulgrew narrating.

This should be a five star book but I had to take off a star for how long this took me and my poor choice for reading it during a pandemic. I will probably come back and change it but don’t let it put you off reading this great story. Thanks for tuning in guys! Happy Reading!

Welcome back to the Disc! Today we will be taking a journey through the Valley of the Djel in the country of Djelibeybi. A world of ancient pyramids, over zealous priests and the ever pressing question of what Handmaidens actually do awaits you as we follow a new character we have not yet met in the Discworld.

Pteppic has just graduated from the Guild of Assassins. With the ink still wet on his certificate, he feels himself drawn back to the kingdom of Djelibeybi after the death of his father, the Pharaoh. But Pteppic soon realises that running a kingdom isn’t always down to the king. Contested with the ancient attitudes of his High Priest Dios, Pteppic will soon realise why things haven’t changed around here for a while.

Out of all the Discworld books I have read so far, this one has to be my least favourite. This is definitely one of the weaker books in the series. While it is still an enjoyable read with the usual wit and fantastic character moments from Pratchett, I kind of was feeling very meh until the final act really kicked off which I find I always enjoy in this series.

The plot is what is the biggest let down here definitely. We have the beginning which is really interesting since we finally get see some guild stuff up close, then Pteppic leaves Ankh Morpork and then it stops. For ages. Then it picks up again with a conflict arising at last, dies again for a while and then ends on a great climactic event. It does wrap up quite well but I can see why this one is very rarely talked about.

Pteppic on the other hand is a joyful addition to the cast of characters so far. Sent to Ankh to be trained and arriving back at his home an outsider once again. Something that Pratchett does achieve here is that struggle within Pteppic of where exactly he fits in with everything. There is a real sense of inner conflict here and we really get to see Pteppic grow into his own person while also accepting his own role in the Discworld and not just Djelibeybi.

I’m not sure in terms of the Discworld how often Pteppic will pop up again if he ever will. From the reading order I have looked over, this book exists with Small Gods within a smaller section of the ancient civilizations of the Disc overall. I did highly enjoy a little view into the Assassins Guild and Pteppic’s development overall but this wasn’t as much of an impact on me as Mort or any of the witches novels.

I think I am finally making some progress here. I have no blog tours over the coming months since i am still settling in at a new job and I’m trying to get back to exercise while also not getting infected. But this marks the seventh novel in the series publication order and I hope to get to at least tenth by the time this month is over.